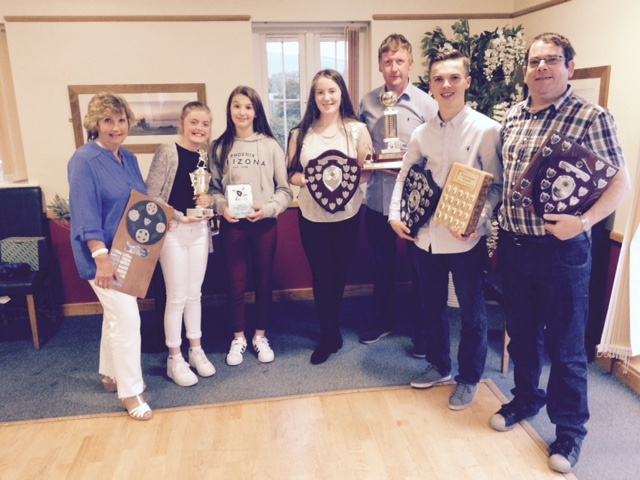 Players from the various Copyshop teams holding their trophies and presented at the recent Presentation Evening held by the Isle of Man Table Tennis Association at the end of the 2015/16 season.

Adam holds the trophy won by the A team continuously for a record seven years. Sean won a number of competitions during the season including the Malcolm Looker Shield. This is presented every year in memory of Malcolm, a stalwart of the Association until his death a few years ago. Sean is the only player to win this award since it was first presented – again another record. Malcolm spent many years playing for the Copyshop A and B teams whilst coaching many of the present juniors now playing in the League, including Freya, Kitty and Sophie. He would be delighted with their success.

Paul joined the Club at the start of the season and was a major contributor to its continued success at the top of the A division. Paul has also represented the Island at various off-Island events including the Island Games.

Missing from the photograph is Ronan McDonnell who for many years has been an outstanding Club and Island player winning most of the competitions held on the Island and representing the Isle of Man in many off-Island tournaments. Ronan has been busy this year with studies and exams so we wish him well and hope to see him again in the future. Although busy, Ronan played a number of matches during the season for the Club helping, as he always has, to keep the Club at the top of the League. Also missing from the photo was Jane Coulthurst who has played for the A team and the Island for a number of years, and has contributed tirelessly with the coaching of the juniors. Her first baby was due anytime so missed this year’s presentation.

Freya from the B team, and Kitty and Sophie hold their trophies – won during the season – are promising youngsters playing for our club teams and also representing the Island at various table tennis events held off-Island.

Gwen won the Gordon Baker Trophy for the second time for her contribution over the years to table tennis. This award is presented every year by the Association committee for services to the game and in Gwen’s case, especially with the juniors.

The club also had four other junior winners: Cameron Dudley, Zac Walker, Billy Coulter and Jack Christian who unfortunately could not attend the Presentation Evening. Zac, Billy and Jack won promotion to the Second Division.

The Club hopes for continued success with all its players in the forthcoming season at the National Sports Centre starting in September.